The Tour De Fleece is in full swing, and I haven't missed a day. Good thing too, because I've got a lot of spinning to do. And unlike last year, where I was posting pics of each day's progress here, I've been spending less time doing updates and more actually spinning. I figure a weekly update shouldn't slow me down too much though.

My original goal was just to spin the 8oz ball o'fluff I bought at Paradise fibers, the Potluck Roving from Ferndale Fibers. When I saw how smoothly it was spinning - and it is a dream to spin, almost as easy as the Shetland and sooo soft - I added a second goal. I am also spinning the 4oz braid of Corriedale I got from Edgewood Garden Studio.

The Steel Potluck Roving is going to be 2 ply, and so far I've spun one bobbin full of a single and started the second. Progress so far - 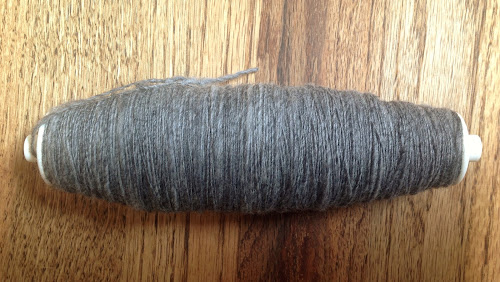 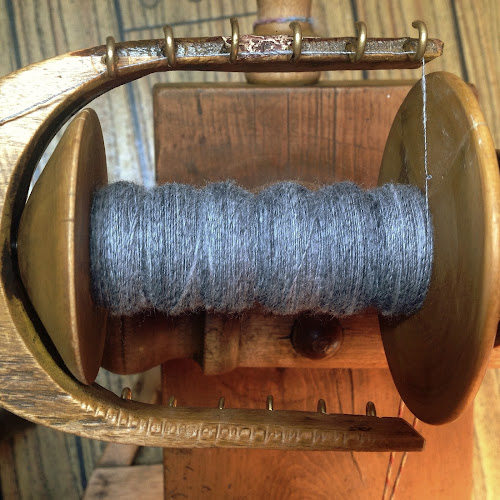 I'm not positive what I'll knit with it, depends on what kind of yardage and yarn weight I end up with. I'm not a consistent enough spinner (yet) to know exactly what I'll end up with ahead of time.

Similar thing with the Brisk Autumn Corriedale, except with that I know that I want some sort of cowl for fall. The style is up in the air, but I've narrowed it down to about a half dozen patterns (subject to change each time I log on Ravelry!)

I spun the first ply of that between plys of the other fiber. I figure mixing it up keeps me interested. No matter how pretty that grey is, looking at it non stop for weeks on end is a sure fire way to end up burned out!

Anyhow - here is the first ply of the Corriedale- 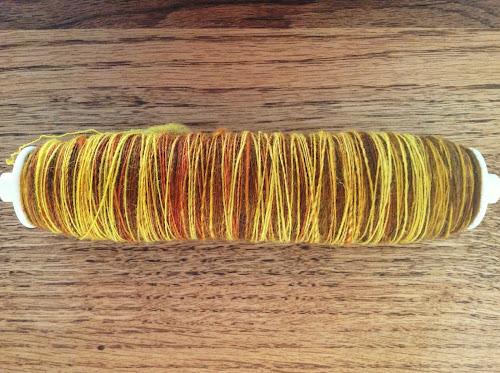 I really love the range of colors in it. Hard to tell when it's wound up like this, but they range from a pale cream, to shocks of bright red and yellow, with a beautiful almost wood grained tonal brown running through it. I can't wait to see what the finished yarn looks like. I'm doing fractal spinning, so I should end up with a beautiful "barber pole" effect with the colors.

The only real knitting I've done lately is on my fingerless gloves. Technically the KAL ended last week, but I'm one of the stragglers who needs more than a month to actually finish anything. 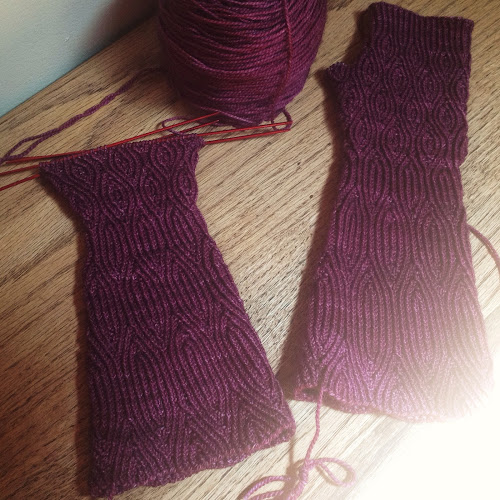 First one is done, except for the thumb. The second is almost to the thumb opening. Shouldn't be too much longer though, and then I'll have a pretty FO to show off. I promise that picture won't have an irritating sun reflection in the corner like this one!

Right now the closest I can come to a new finished object is this Baby Surprise Jacket. You know, the one I finished knitting in March? I finally sewed on the buttons on, using pink and cream ones I had in my stash. 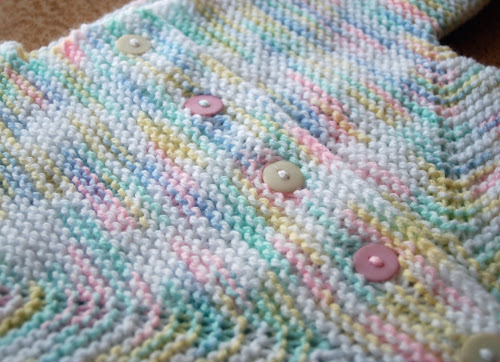 We already found out (a while ago) the momma-to-be is going to be having a girl and since she is due in August, I figured I better get it done! Here's the whole sweater. It should fit right around winter time, hopefully. 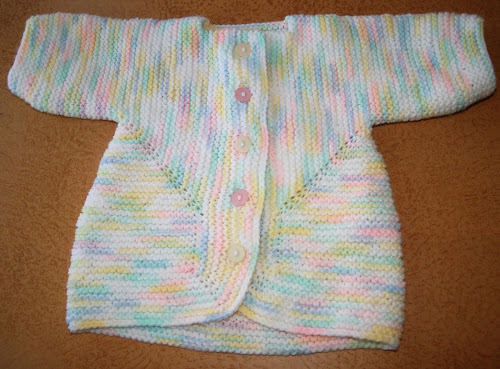 A nice surprise today was the half dozen back issues of knitting magazines a customer brought in for me. All Interweave Knits, except for one Vogue Knitting. 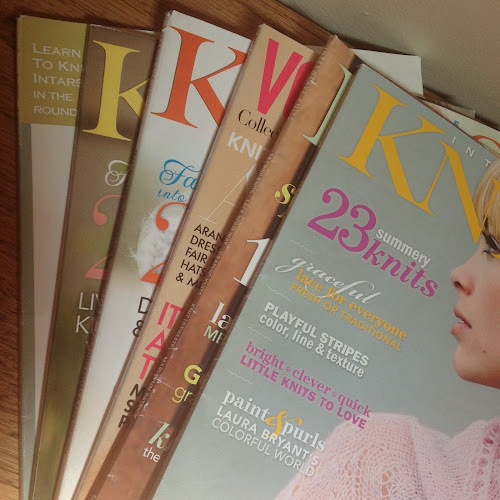 Some I have digital copies of, but flipping through them is more fun sometimes. I predict my queue will get even longer before I'm done. Especially since she said there is probably more issues to come. Yay! I have the best customers!

Back to spinning for one more second before I go. After jealously admiring other's Trindles since before last Tour De Fleece, I finally ordered one of my own. I was going to wait and do it as an end of Tour reward, but maybe this way it will actually arrive by the end of the Tour.

My main problem with online ordering is that I want it NOW. I mean, I ordered it this morning so why shouldn't the mailman be able to drop it off this morning...yeah, logical brain is busy telling impatient-new-shiny-obsessed brain to settle down and wait. I'm not sure it's going to work though.

One thing I can guarantee is that as soon as it arrives I'll be spinning away and showing it off here :D

Posted with Blogsy
Posted by Unknown at 6:14 PM